This month Intermec agreed to be acquired by Honeywell thus joining a long list of businesses in the Auto ID and mobile computing sector who have fallen victim to industry consolidation and ended up being absorbed into other organisations. Companies such as Telxon Hand Held Products Metrologic PSC Symbol and Psion Teklogix have all gone the same way as the industry that for many years was considered a backwater of IT finally gets shaken out.

What we know as Intermec Technologies had been in business since 1966 and was originally known as  “Interface Mechanisms”. The company had a long history of innovation inventing Code 39 in 1974 and numerous innovative hardware devices. It was also unique amongst it competitors in maintaining a broad line of products. Later the large portfolio would prove to be tough to maintain and manage. 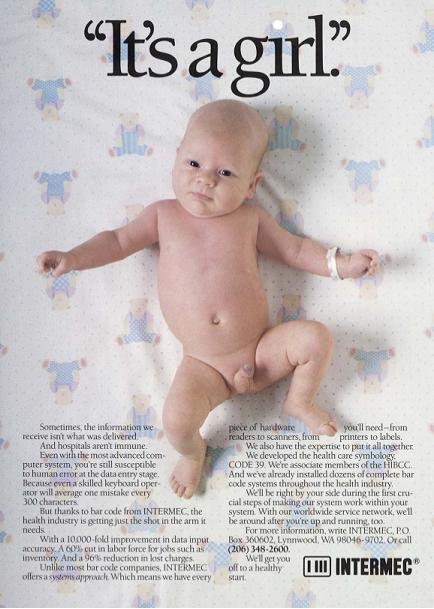 Intermec’s early market was  identifying goods in manufacturing and warehousing by using those new fangled barcodes. Typical applications included inventory warehousing and work in process tracking. Although the public viewed bar code as an instrument of retail, Intermec ploughed a deep furrow in Industrial applications and with the defense industry in the US. Company president during the early 90’s was Tim Koogle who left Intermec in 1995 to become pre IPO and first CEO of start-up Yahoo!

In the mid 90’s the company introduced the Janus rugged “mobile computer” which had a non propriety DOS OS and spread spectrum radio. This was to become the first in a long line of highly regarded rugged handhelds based on Windows Mobile.

In the same period it was clear that the company was getting left behind by three competitors. Symbol dominant in handhelds and POS scanning the number two handheld vendor Telxon  and Zebra who were number one in thermal printing. Symbol would acquire Telxon in 2000 to consolidate it’s number 1 spot  in what had become the largest volume market for enterprise handhelds and scanning after all – retail.

Zebra would continue with it’s focus on desktop and increasingly mobile printing.

Being number 2 is tough so in 1997 Intermec acquired Norand who had focused on hand held computers primarily for the Direct Store Delivery market. As well as UBI a Swedish company who developed and sold a range of thermal printers and bar code scanners. Former employees might remember the initial integration was bedevilled by a simple problem…what to call the company? It was eventually decided to use the name “Intermec” but it took a while to figure out and the temporary handle “Stronger Together” stuck around as shorthand for the new entity.

Even today the woes of the business can be traced back to this “merger” of different cultures and business focuses. On paper the mix was sure to  have been a winning formula of products and channels to market. The prospect of one company capable of performing end to end all manner of Auto ID and mobile computing tasks in just about any industry should have been very appealing especially to larger customers.

Unfortunately the company never really figured itself out, was it a mobile company with a thermal printing division or an Auto ID business that dabbled in mobile? The strong and stable management it needed post merger to execute a clear vision ended in stalemate as factions from the merged businesses took turns running the show in the image of their former company – not a new one.

The killer market or product strategy never emerged despite numerous re-shuffles and initiatives to partner with industry leaders latch on to RFID or leverage distribution to conjur up some growth. Although the company was selling “solutions” the sales time horizon shifted from next year to this quarter. Even the magnificent office the company built in the early 90’s ended up being too big for the business.

A treatise about Intermec would fill a book – this being an excellent summary.  But speak to anyone who worked there and most say the same thing – “what a great group of people” .  For many years the company had a real feeling of teamwork and community amongst the rank and file staff that marked it out against it’s competitors.  A secret sauce that really did help it punch above it’s weight on many occasions.