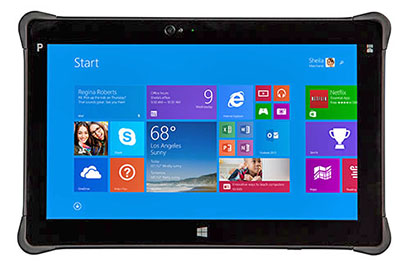 xTablet T1600 weighs in at 1.23 kg and is part of a new breed of of large screen road warrior rugged tablet designs that are fashionably thin and light, run Windows 8.1, use capacitive multi touch and offer adequate on-board I/O. But are are much tougher and better suited for harsh business operational environments than the generally fragile thin consumer tablets. At last the blue collar rugged tablet to replace your laptop .. really !

The Large Screen Road Warrior Rugged Tablet T1600 employs an ultra-low voltage U-Series “Haswell” Intel 4th generation i5 processor. The dual-core i5-4200U runs at a base speed of 1.6GHz, with turbo boost speeds up to 2.6GHz. That appears to be a good match to the 45.8 watt-hour battery for a 7 hour estimated battery life.

With a diagonal screen size of 11.6 inches, the xTablet T1600 offers more display real estate than any other we have seen at this price point.  In terms of usable area that’s almost a third more than that of an iPad Air, and 2.7 times as much as a typical 7-inch tablet. For a Windows based tablet that can make all the difference especially when wearing gloves on or when using the classic Windows desktop and software with all its small controls, checkboxes pulldowns and sliders.

The 1366 x 768 pixel resolution is a good match for this size display. The T1600 has 10-point capacitive multi-touch that MobileDemand claim can handle rain drops and use with gloves. Alternatively use the metal mesh tip stylus.

The T1600’s display offers 400 nits brightness which is about twice that of your average laptop, making it very vibrant indoors and likely adequate for outdoor use as well. Since brighter backlights draw more power, the T1600 uses its light sensor to automatically adjust screen brightness, with settings configurable via a special brightness level setup panel. A 800 nit Hi-Brite version is also available. 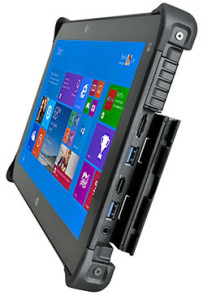 For wired connectivity, the T1600 offers two native high-speed full-size USB 3.0 ports, a combo in/out audio jack, and a docking connector, with RS232 and USB available via the optional dock. T1600 also has an expansion connector that can accommodate various  modules.

Large Screen Road Warrior Rugged Tablet includes options such as GPS and either an HF RFID reader or a 1D/2D scanner. There’s a 5mp rear-facing auto-focus camera in addition to the standard 2.0mp front-facing webcam. Along with ambient light, the tablet has a G-sensor as well as a gyroscope and e-compass.

Vehicle and office docks are available. The vehicle dock has a lock option, 75mm and 100mm VESA pattern for mounting, optional keyboard mounting with an AMPS pattern, and provides Ethernet, two USB 2.0 and USB 3.0 ports each, HDMI, RS232 serial, and SMA connectors for external WWAN and GPS antenna. The office dock has the same connectivity minus the SMA connectors.

While the xTablet T1600 is around 2 cm thick ruggedness is impressive. The tablet can survive 3-foot drops, sealing is to IP65 although with the standard back-strap it is easy to carry.

Find out how the Large Screen Road Warrior Rugged Tablet T1600 can be the rugged Windows tablet to replace your laptop.