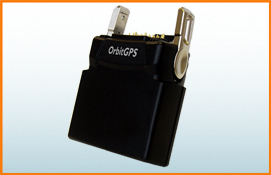 It’s Back. After a brief production hiatus we can announce the renewed availability of the OrbitGPS Snap On GPS G3090 receiver for Motorola Solutions MC9090 & MC9190 mobile computers. Learn More about G3090

The OrbitGPS Snap On GPS receiver is the only way to add tightly-integrated GPS to your MC9X90 based mobile data collection or RFID solutions. Just snap it on, point your app to the com port and you have GPS…simple.

The Meaning of Life

Get in touch about the G3090 GPS Snap on and see how you can leverage your investment in MC9090 and MC9190 mobile computers.

The Motorola MC9000 series has been amongst the most popular devices in the enterprise mobility market and many are still in use in a variety of industries. As units like this are being used longer before being replaced it is worth knowing that you can add GPS to the Motorola MC9090 and MC9190

Unlike most contemporary units neither of these had GPS built in which makes the OrbitGPS G3090 a cost effective GPS enhancement to legacy deployments returning a great return on investment ROI.

These units are ideal where the user is predominantly on foot and not looking to return the unit to a vehicle or desk cradle.

The receiver is designed to snap on to the bottom of the mobile computer to provide GPS position information to applications running on the device. The GPS receiver features a rugged plastic housing that attaches using the device’s serial connector for communication and power.

The G3090 GPS receiver has been tested for compatibility with all the Microsoft Windows Mobile operating systems used on the MC9090 and MC9190 products. The computer can be charged through the attachment with a standard dock charger.

Outputs of GPS information are in industry standard NMEA sentences which are compatible with most GPS software applications. It can also be configured to output GPS information in the SiRF Binary format. The G3090  offers typical accuracies of 3-5 meters uncorrected and 3 meters or better with Wide Area Augmentation System (WAAS) correction.

The G3090 is tested to comply with FCC and CE standards.